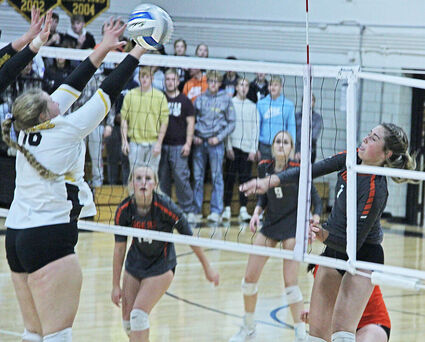 Baylee Kulesa looks for a kill in the Tigers' game in Faulkton last week.

The Ipswich varsity volleyball season came to an end with a disappointing 3-2 Region 6B bracket championship loss to Faulkton at Faulkton on Thursday, Nov. 3.

So Faulkton advanced to the SoDak 16 facing a familiar Lake Region Conference rival Northwestern and this match was to actually be played on a neutral court in Ipswich at 7 p.m. on November 8. The other Region 6B bracket championship was won by Herreid-Selby Area which would face Colman-Egan on Nov. 8 for their berth in the State B.

Meanwhile Faulkton indeed won the fifth-set tiebreaker 15-10 over the Tigers. The hosts had defeated I...