Battle of the big cats 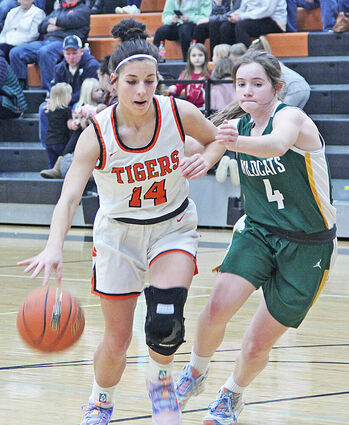 The visitors would indeed lead at each respective quarter break -19-8, 31-15 and 49-28. But Ipswich would then establish a narrow 10-9 scoring advantage in the final stanza.

The visiting team was led by Adriana Ratagan with 19 points and 10 rebounds, a double-double for sure. Ella Boekelheide and Ashley Haven also reached double-figures in their scoring column with 14 points apiece. Three other Wildcats scored.

Ipswich netted 13 baskets that included those two treys and went 10-17 in free throw opportunities. Northwestern was unofficially a warm 24-48 from the floor and included six treys. But the Wildcats were only 4-17 at the charity stripe, believe it or not!

Unofficially Ipswich ended up with 18 rebounds; the Wildcats 32. But Olivier would be next after Kulesa's six boards with four rebounds of her own.

Ipswich had 14 turnovers and the Wildcats, 16. But the Tigers would somewhat off-set their own miscues with nine team steals.

The Tiger varsity girls dropped to 1-5 at that juncture of their season.